Can Rheumatoid Arthritis Cause Bruising? 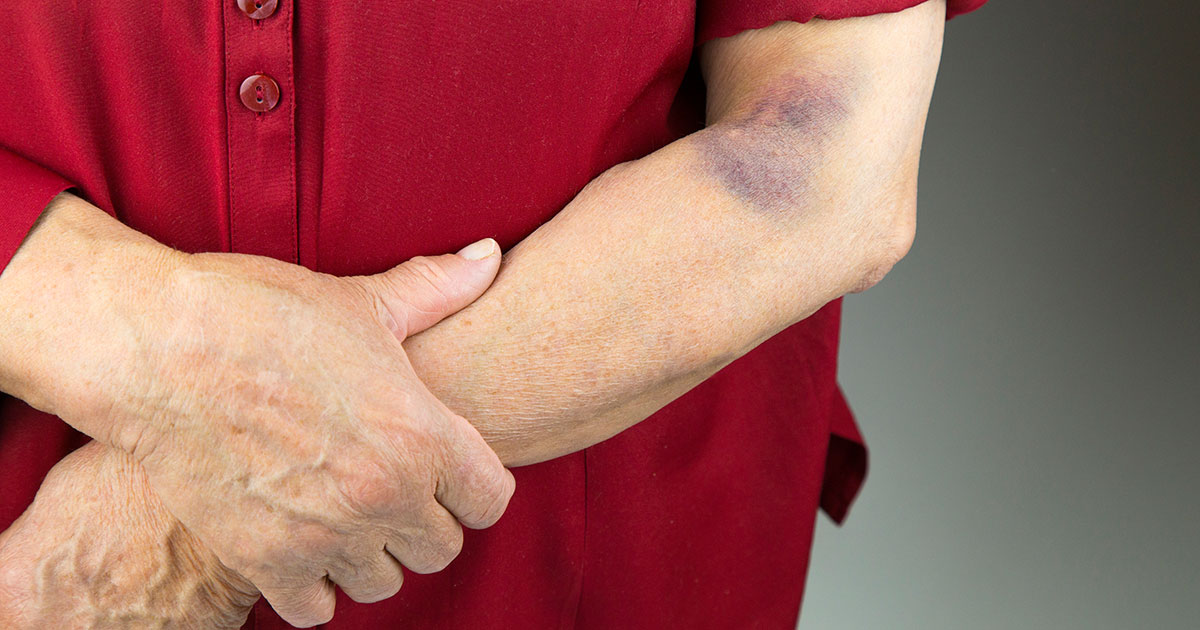 The Truth About Rheumatoid Arthritis Bruising

I’ve always had at least one bruise on my body at one time or another, often seeming to appear out of totally thin air. It can be frustrating, but this is all part of the RA territory.

Before I was diagnosed, I did worry that I had something more sinister, like leukemia (probably thanks to reading far too many Lurlene McDaniel books as a pre-teen), but now that I understand that someone touching me can cause bruising. I’m a bit more okay with it.

So, why do RA patients sport as many bruises as a prize fighter? There are a few explanations for this. Mostly, easy bruising is caused by a lowered platelet count, meaning that it is making it difficult for the body to allow the blood to clot.

This is an issue that can be caused simply by RA itself, as the condition can lower your platelet count, as well as cause other skin problems.

What is a Bruise?

A bruise is a discoloration in the skin caused by a blow (or in some cases, a light tap) to the area.

A bruise is medically referred to as a contusion and typically is not a cause for concern, even though they do look pretty unsightly – especially if you are getting them often on areas that are exposed, like your arms and legs during the summer. This can, of course, prompt concerned questions and curious remarks.

How to Cover a Bruise in Minutes

If you have got bruises on your arms or legs and you have got a special event to attend, you can cover your bruise with foundation. However, you need to make sure your foundation has both pink and yellow undertones, like the skin on most people’s arms and legs.

Just dab some of the foundation onto your skin with a makeup brush or your fingers. You can add some highly-pigmented concealer on top if the bruise is especially bad. If it is flat against your skin, dust it off with some loose mineral powder to set it and ensure that it stays put all day.

If you would like to use a color corrector, you can grab yourself some peach or light orange (available at most makeup counters). Dab a tiny bit on your finger and apply it to the bruise (not too hard, or you can make the bruise even worse) and then cover it with a foundation or concealer.

This may not cover the bruise completely, but it will, at least, reduce the appearance and make it much less noticeable. If your bruise is raised, skip the powder to set it as it can draw further attention to the area.

What to Do If You Have a Bruise: How to Care for a Bruise

If you have got yourself a big bruise, you can help the swelling go down by applying some ice to the affected area for about 15 minutes on and off during the initial days of the bruising. As much as possible, rest the area.

A bruise itself shouldn’t cause too much concern unless you also have accompanying worrying symptoms. This can include redness on or around the area, severe pain or swelling and if you cannot move the joint nearest to the bruise.

You should always keep an eye on a bruise you acquire without any knowledge of what happened. If you notice a significant bruise for no apparent reason, it is important to consult your rheumatologist or see a doctor as soon as you are able.

When Should You See Your Doctor About Bruising?

In and of itself, bruising is not necessarily dangerous, but sometimes there are causes for concern. While it is normal for many people with RA to bruise more often than most, if you find you are suddenly bruising excessively, or more than normal, you should contact your doctor or rheumatologist.

This could mean an adjustment in medication is in order and could signify that something more serious is wrong, such as another disorder or disease having developed.

Also, low platelets can cause internal bleeding, and more rarely, bleeding in the brain. Both of these issues are serious and need to be addressed immediately.

If you have a bruise that doesn’t go away in a couple of weeks, even if it isn’t causing pain, it is worth it to go and get it checked out, as this can be a sign of something more serious.

Monitor your symptoms and any that appear in conjunction with bruising. See a doctor if you notice:

Additionally, it should be noted if you develop a rash-like appearance on your body (it can occur anywhere, but more often appears on the legs). This is called petechiae and is associated with low platelet counts. As usual with RA, if you notice anything concerning about your health, contact your doctor immediately.